Will Taylor and Strings Attached 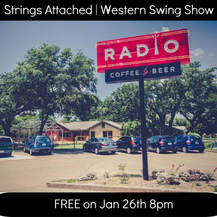 About the show:
For the past decade, Will Taylor’s group has made a name for itself by reworking iconic music like the Beatles ‘White album’, Sgt. Pepper’s Lonely Hearts Club Band, and Rubber Soul as well as the hits of Led Zeppelin, Joni Mitchell, Pink Floyd, Paul Simon, Peter Gabriel and Jimi Hendrix—adding jazz and roots flavors along with string arrangements to lovingly assembled acoustic renditions.
Their performances in churches and sanctuaries are akin to a religious experience for fans of music so the act of reworking the renowned songs and sounds of two of Texas' most legendary country artists was not entered into lightly. In fact, the classically-trained Taylor went the long way around to playing fiddle in a country band. Read more here..